On April 5, 2019; Pastor Thomas Marshal McElmurry passed from this earth life into the Eternal Spiritual Life.

Thomas Marshal McElmurry, Sr. entered into glory on Friday, April 5, 2019.  He was passionate about his desire to see Jesus return with the hope he had understood the Scriptures correctly concerning the events leading up to the Second Coming.

Above all things, Tom was called of God to preach “the Word”.  He held Seminary, University, and Institutional degrees in Theology, Divinity, and Physical Science.  He faithfully served as Pastor of the Dardanelle Missionary Baptist Church for 45 years.  Prior to entering the ministry, Tom served as a meteorologist in the United States Air Force.  He was certified as a Meteorologist by the United States Air Force in 1954 and became a member of the American Meteorological Society in 1962.  He served in the Mid-Eastern, African, European and Far-Eastern Theaters.  He retired from the Air Force in 1971 as an analyst for the National Security Agency.

Tom was a certified teacher and taught Physics, Chemistry, Physical Science, Biology, and Earth Science in the Dardanelle School District.  He was also a published author, having written three books addressing a “geological exposition concerning the second coming of Christ”.  While in the military he wrote scientific articles published by the USAF and the Bulletin of the American Meteorological Society.

Until his death Tom faithfully preached the word of God.  His passion for preaching and teaching about the Second Coming of Christ led him around the world – but always back home to his family and his church family in Dardanelle.  He preached in 20 Missionary Baptist colleges and seminaries and over 800 Missionary Baptist Churches in Lithuania, Romania, Africa, and the United States. 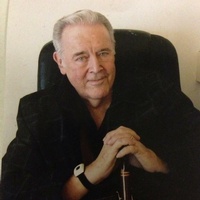 All of Sermons on this website are from Bro. Tom and most of the studies are also from his website and books that I have posted here for your information. If you would like to listen to the Sermons, here is a link to all of them in Numerical order.

01.  02 Sermons in Numerical Order on www.BibleSermonsMP3.org

Tom McElmurry is a pastor who holds University, Seminary, and Institutional degrees in Physical Science, Theology, and Divinity. He was certified as a Meteorologist in 1954 by the United States Air Force; became a member of the American Meteorological Society in 1962; served in the Mid-eastern, African, European, and Far-Eastern Theaters as a Meteorologist; and is a member of the Israel Geological Society. He worked as a tornado forecaster in the Kansas City Severe Weather Service, and as an analyst for the National Security Agency, retiring from the USAF-NSA in 1971. He has taught Physics, Chemistry, Physical Science, Biology, and Earth Science in the public school system as a certified teacher, and has written three books: Tectonic Chaos, Tribulation Triad, and Tribulation Birth Pangs from the Bottomless Pit. He has also written scientific articles published by the USAF and the Bulletin of the American Meteorological Society. His wife and family reside in Dardanelle, Arkansas, where he has Pastored since 1974. His military and civilian education includes 2,730 clock hours of meteorological instruction in USAF selected institutions of higher learning, and more than 265 University and Seminary hours in undergraduate and graduate studies. He has lectured worldwide in 20 Missionary Baptist colleges and seminaries; and in more than 800 Missionary Baptist Churches in Lithuania, Romania, Africa, and the U.S.A. He is a distinguished graduate of the USAFMAC Military Academy. He has a weekly short wave broadcast on Saturday by Middle East Bible Voice on a frequency of 13.710 MHz at 1930 UTC. It can be heard in Israel at 9:30 P.M. local time and in Iraq at 11:30 P.M. local time. It is heard in Israel, Lebanon, Cyprus, Syria, Jordan, Turkey, Iran, Iraq, Saudi Arabia, Kuwait, Yemen, Oman, Afghanistan, Pakistan, Armenia, Turkmenistan, and Qatar.

Genesis 1: [1] In the beginning God created the heaven and the earth.
[2] And the earth was without form, and void; and darkness was upon the face of the deep. And the Spirit of God moved upon the face of the waters.
[3] And God said, Let there be light: and there was light.
[4] And God saw the light, that it was good: and God divided the light from the darkness.
[5] And God called the light Day, and the darkness he called Night. And the evening and the morning were the first day.